In the measurement wiki there is some discussion about the thermal effect on the output power of laser diodes and especially on the thermal rollover that can be seen when increasing the operation current. Since measurement set-up are usually done on an unmounted laser chip, the thermal resistance from the laser diode to the supporting stage or chuck is usually high. The heat that is generated in the cavity cannot escape the laser diode quickly enough and the temperature rises fast. The effects of high temperature on laser diodes are detrimental, but the aging mechanisms do need some time and the observable change in laser behavior is temporary. Under optimized thermal management, the laser behaves again as if nothing had happened. This is not true for current peaks though, since the effects of current peaks damaging mechanisms in that case are non reversible. 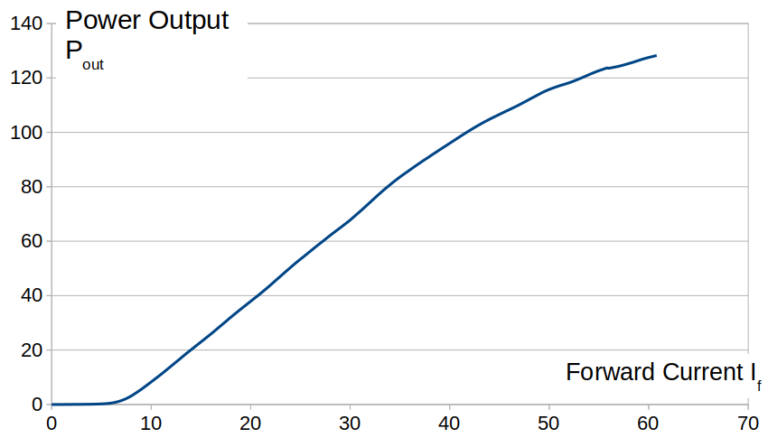 Thermal Rollover on a P/I curve measurement from a  laser diode. The power output does not increase linearly with the forward current The heat in the laser diode reduces its efficiency..

Under the operation conditions defined by the manufacturer, laser diodes can show very high reliability with lifetimes exceeding several thousand hours. Poor thermal management and high operating currents are the main aging mechanisms while current spikes are the main reason for permanent laser damage. Aging mostly translates into a gradually and irreversible lowering of the wall plug efficiency that in itself increases the heat produced in the laser, further accelerating the aging mechanism.

Laser damage caused by current peaks can be observed as permanent reduced output power, a permanent increase of the threshold current, change in beam divergence and in many cases, the sudden incapacity to lase.

Under a very high current, even if this is for a fraction of a second. The laser intensity generated at the laser diode facet will cause its self destruction. COD is the abbreviation for Catastrophic Optical Damage.