What is the Name of This coating Technology?

The field of optical thin film coatings is very diversified and depending on the desired performance of the film, different approaches are used to achieve certain properties. As we will see later, a single material can display very different characteristics depending on the deposition process with which it has been grown. Despite extensive research, controlling all the physical parameters of a film is very difficult and many of its central aspects are yet to be understood in full detail. Most of the available knowledge to this subject is phenomenological and tool dependent. A qualitative description is generally possible nonetheless. ECR plasma coating in particular (not ECR assisted CVD) is a singular method that has achieved unparalleled optical thin film coating quality, yet it has not earned the same attention as other methods in the academic world and accessible documentation to this method and its results is somewhat limited.

The thin film coating methods are rapidly evolving and there are many combinations of different technologies that make a technology naming quickly obsolete and maybe even confusing. By describing the technology or technologies that are involved in the three main aspects of the thin film process it is possible to render a description of how a specific tool does grow films:

I. Generation of the depositing species.

II. Transport from source to substrate.

III. Deposition onto the substrate and thin film growth.

ECR stands for electron cyclotron resonance. The ECR technology is used to create a plasma that is used for thin film coating as we will see below. The species are generated by a RF sputter system in which the plasma has been individually generated by a MW field. The transport is done by line of sight because ECR sputter can be done at very low background pressure. The deposition is done with impact energies in the 10-40eV at ambient temperature yet with energy input by the ECR plasma. 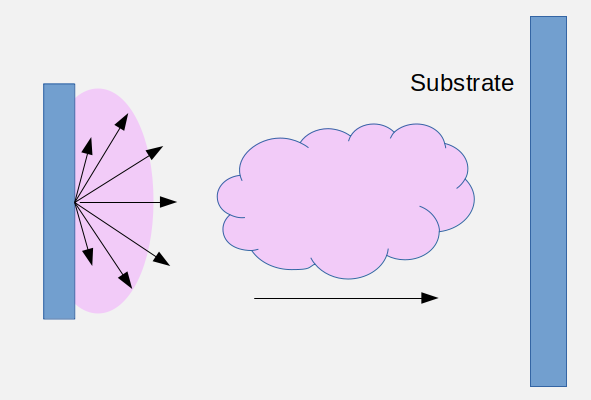 Any thin film coating tool can be described by explaining the technology or technologies that are involved in the three steps of the coating process as mentioned above.

Inserting the deposition species as a gas

A big family of tools insert the material that needs to be deposited in its gaseous phase into the deposition chamber and all the above mentioned steps take place simultaneously. Usually it is difficult to influence individually each aspect of the deposition process. The gas phase can be achieved either by directly injecting a gas compound containing the desired metal into the deposition chamber (for instance MOVPE for metal-organic vapor phase epitaxy or ALD for atomic layer deposition) or by strongly heating a solid to its evaporation inside a vacuum chamber (EBE for electron-beam evaporation or MBE for molecular beam evaporation for instance). The deposition can usually be done on very large surfaces but the characteristics of the growing film tend to be unsatisfactory for optical films. Especially if the substrate cannot tolerate being heated up to high temperatures (over 500°C). Epitaxially grown semiconductor films for LEDs and Laser or SiN for power electronics are often grown with CVD (chemical vapor deposition) methods in which the substrate becomes very hot. Sometimes a plasma with accelerated ions bombards the growing thin film to modify its properties as well. 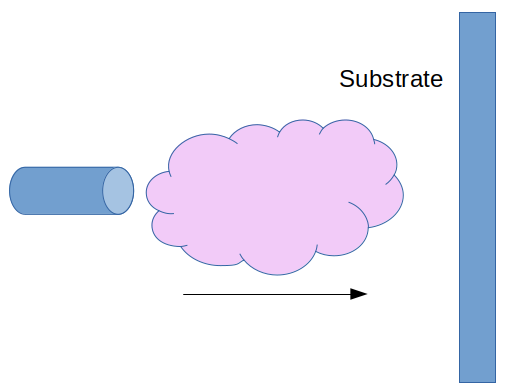 In many tools, especially for large throughput, the species are introduced in the chamber as a gas that reacts thermally and/or chemically with the substrate to form a film.

Plasma: its importance is huge

Many deposition methods involve the use of a plasma in the deposition chamber. In this family of processes the three above mentioned steps are often likely to be controlled individually, leading to more complex tools. The substrate areas tend to be smaller as well. Their popularity arises from the capability to engineer many characteristics of the growing films such as diffraction index, light absorption, crystalline structure of the thin film and so on. Besides, films grown with the aid of a plasma tend to have a lower sensitivity to air humidity because they are less porous and more dense. Optical mirrors for laser diodes or piezoelectric AlN layers for SAW and BAW filters for instance are often grown with methods involving a plasma such as ECR plasma coating. 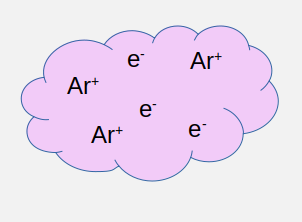 Plasma is a partially ionized gas containing approximately equal number of positively and negatively charged species. Their unique properties make them highly desirable for the the growth of thin films. With the plasma it is possible to transform the gaseous species into projectiles that etch and sputter the particles from the target and to impinge energy in form of kinetic impact into the growing film. The most common plasma is the discharge type, generated by applying an electric field to a volume of gas. The present electrons (at low gas pressures) become very fast and there is a high probability that they accumulate enough kinetic energy to to excite dissociate or ionize the heavier gas atoms and molecules during inelastic collisions. In the ECR system, a high concentration of highly excited electrons makes the plasma possible at even lower gas background pressures and renders overall access to a set of deposition parameters that are otherwise not possible.

Components of an ECR Plasma System